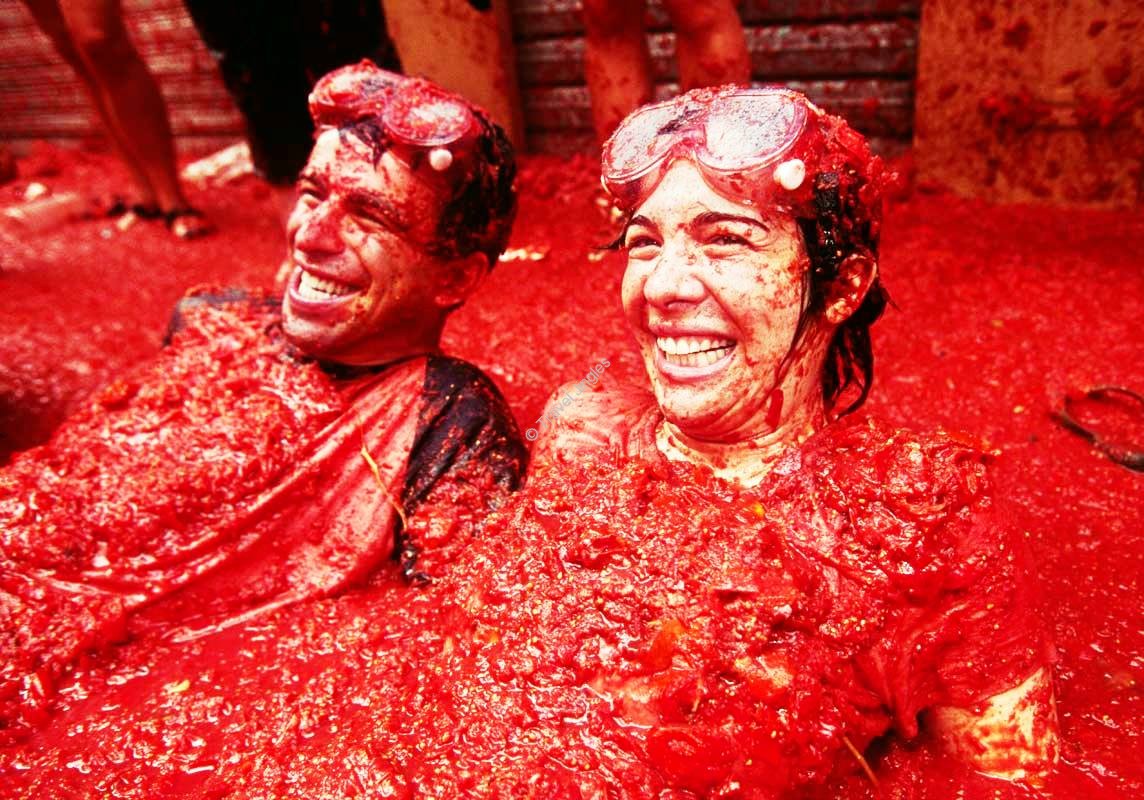 THIS IS WHAT YOU WILL FIND IN SPAIN IN END AUGUST

Today, I am writing about something very interesting. While I was learning Spanish during my graduation, about a decade back we read about this wonderful game which is played in Spain with tomatoes and is called La Tomatina. I could relate to it and I was always inquisitive to know about it in detail. Do you remember the Indian movie ‘Zindagi Na Milegi Dobara’, where the festivity of the famous tomato fight (Tomatina) of Buñol was featured? Do you remember the excitement and charm which was clearly visible on the faces of the actors? Yes, it is the same time of the year when La Tomatina is celebrated. The success of the Tomatina of Buñol, one of the Spanish festivals with the biggest international projection, is based on the universality of its approach.

The Tomatina of Buñol is one of the festivals of Spain with leading international projection. It is a matter of pride when in 2015, to commemorate its 70 anniversary, Google dedicated one illustration on their main page, one of the famous “doodles”. The festival is best defined with uniqueness with universality. The celebration recreates a battle in a humorous manner. During the hour-long throwing of tomatoes, all the worries of the people disappear. It is a splendid game which paints you in red with tomatoes and its red juice. As we were told by Huizinga in his book “Homo lundens”: the game is inherent to human culture. The success of the Tomatina of Buñol, one of the Spanish festivals with the biggest international projection, is based on the universality of its approach. 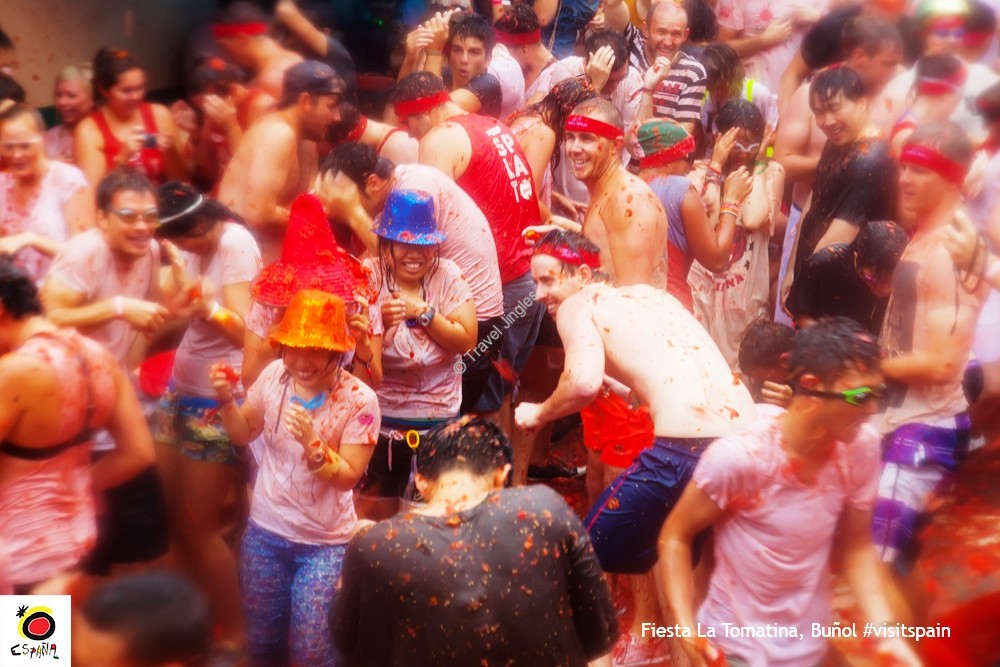 Originally, La Tomatina was celebrated by the local people of Buñol. But now, the doors are open for tourists also to participate and be a part of this vibrant festival. This makes them carry some amazing memories, back to their home town. 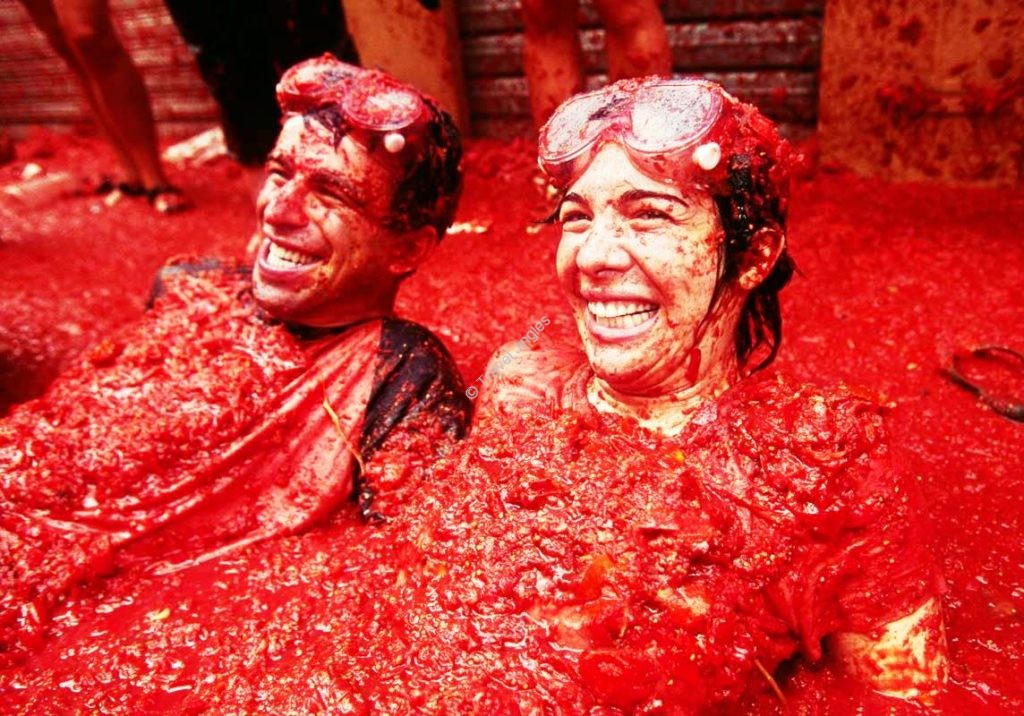 This festival of Spain, makes them feel proud of their tradition and gives them the pride to belong to a country with such deep-rooted funfilled-festivals.

La Tomatina is eminent and celebrated on the last Wednesday of August, every year. The game is celebrated with a lot of zeal and enthusiasm. The celebration starts around 11.00 a.m. and is announced by fireworks just when the Cucaña has ended. I know, you would not know what “The Cucaña” is. Let me illustrate, It consists of reaching a ham placed on top of a greased pole; to avoid a rapid heroic deed and give free reign to the laughter.

After this, it is already the time to throw tomatoes and paint the town red! This lasts for one hour after the start. La Tomatina takes place between the streets of San Luis and the Diputación de Buñol Avenue in Spain.

It is one of its kinds. You have to witness to be a part of it, to actually live it. Innumerable trucks are loaded with tons of tomatoes and are driven through the lanes. The tomatoes are distributed by volunteers among participants, who are already restless and eagerly waiting for throwing tomatoes on their neighbours. Imagine the urge you feel when you are standing with a cake in your hand next to a friend with a great sense of humour. You know you want to rub the cake on your friend’s face and let that child in you enjoy it. It is like feeling a chill in the backbone which slowly hits your face and lips with loads of giggle and laughter.

The first truck is offloaded of “ammunition”, blowing its horn. The environment is fun filled. Those riding on the truck throw the first tomatoes. Finally, the vehicle stops and the cargo is distributed in no time, and the crowd rushes forward to stock up on “bullets”. Within no time, everything turns red. Trucks loaded with tomatoes arrive one after another. The crowd is enjoying every moment and completely intoxicated in the ‘aura de rojo’. The smile on the participants’ faces are everlasting and speak volumes without even uttering a word. After good one hour, a second shot is fired signaling the end of the battle. Now comes the tricky task of washing down the brave participants with hoses – they don’t want the game to end. But, as all good things come to an end, so does this. They are already thinking and waiting for the next year’s “Tomatina” to come. 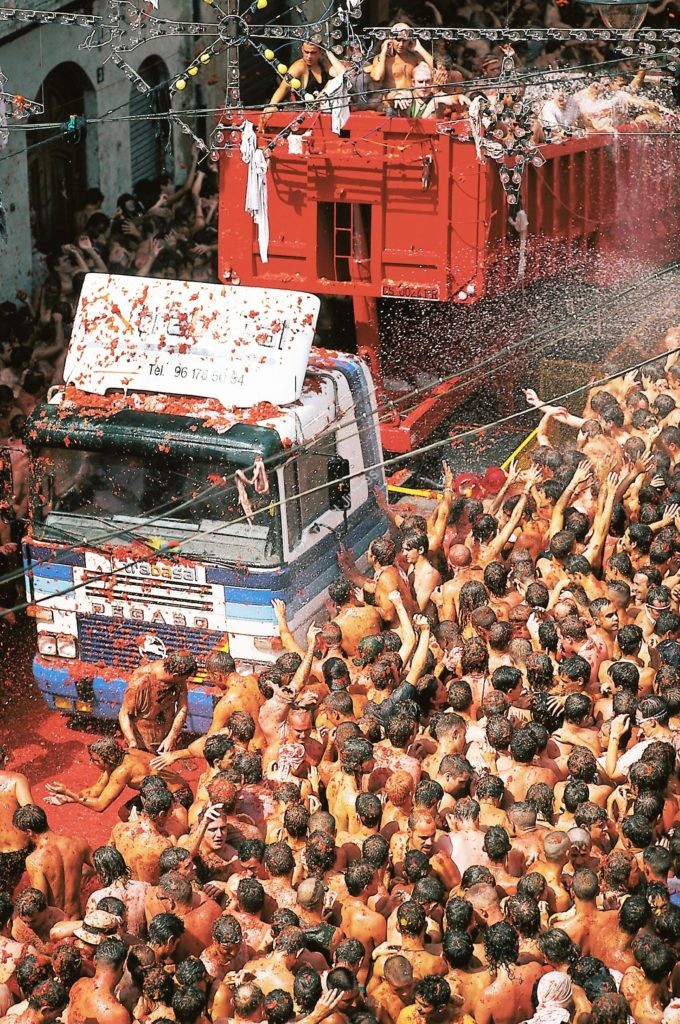 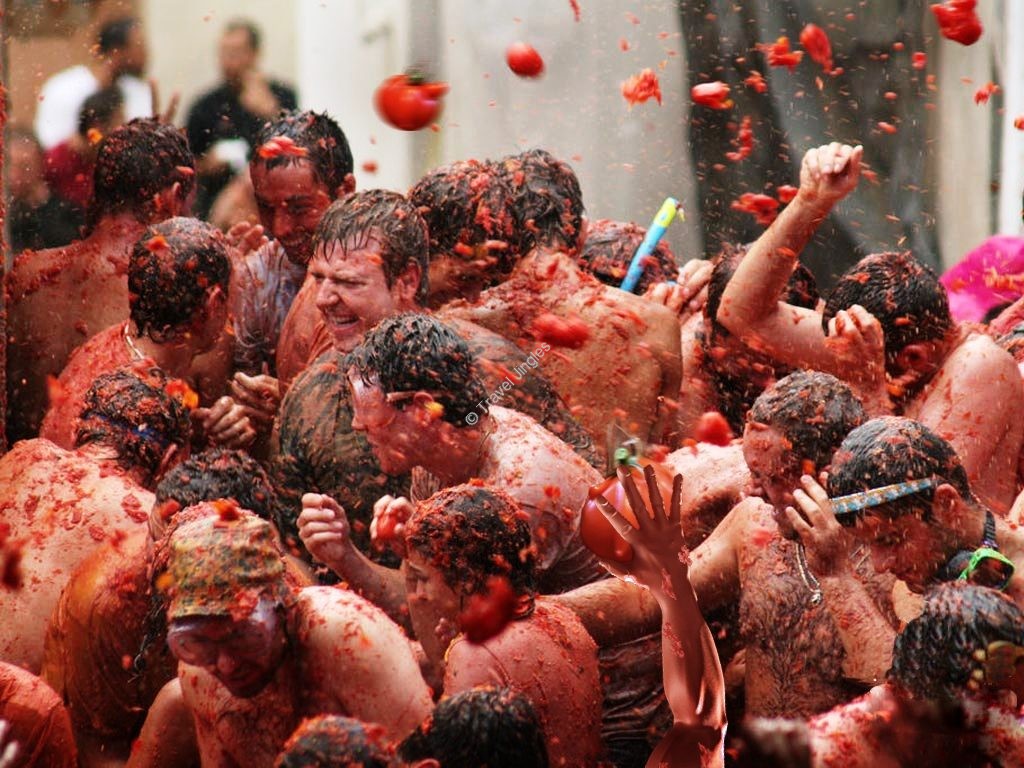 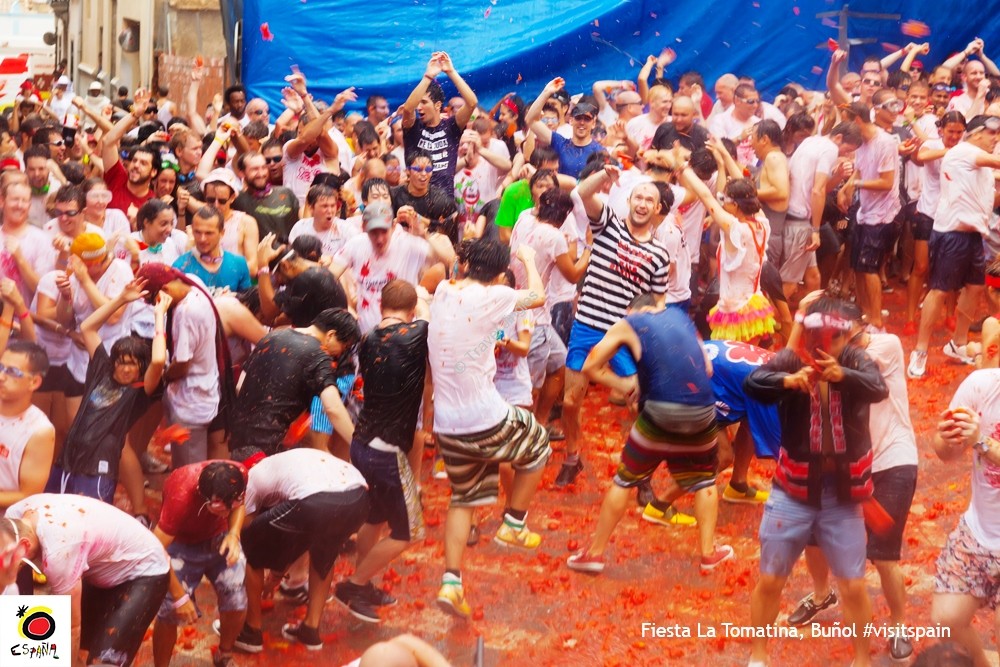 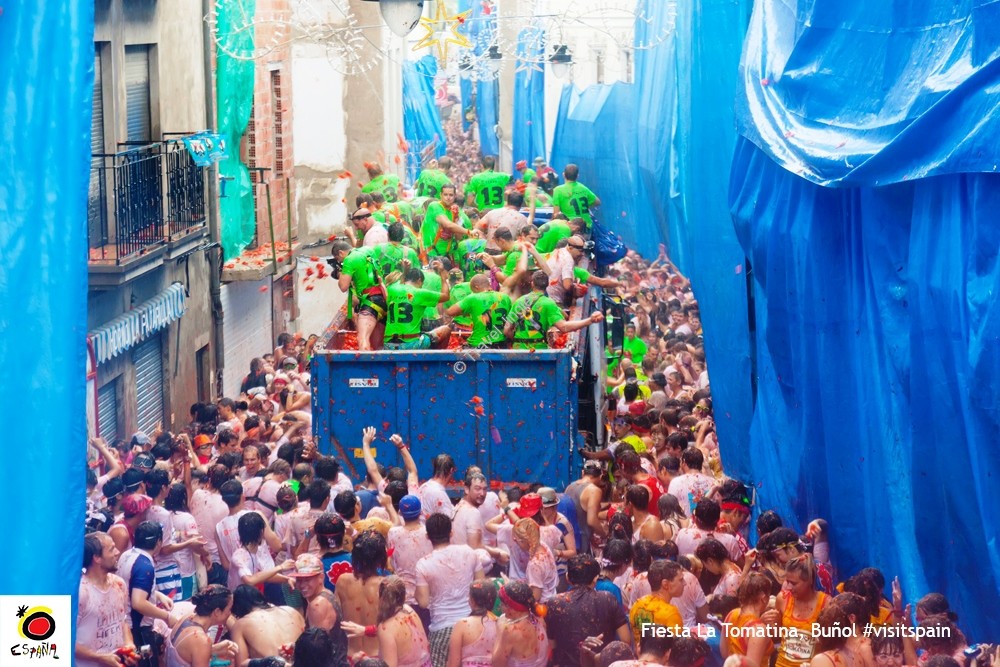 It’s a cherry on the cake, that the Disney Factory has dedicated them one of their famous “Disney Shorts”, entitled “Al Rojo Vivo” in which Red is the thread of this animated short starred by the tireless Mickey Mouse where the throwing of tomatoes is the protagonist of the end of the story.

So, those of you who are planning to visit Spain do not miss this enthralling and amusing game ‘La Tomatina’!

To read more on the fiesta, visit: