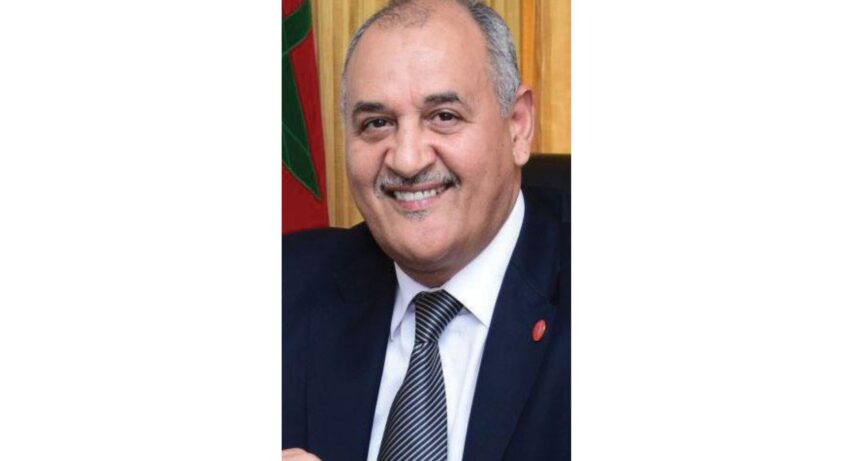 Morocco is a country with fusion of cultures, red city, blue city and much more. 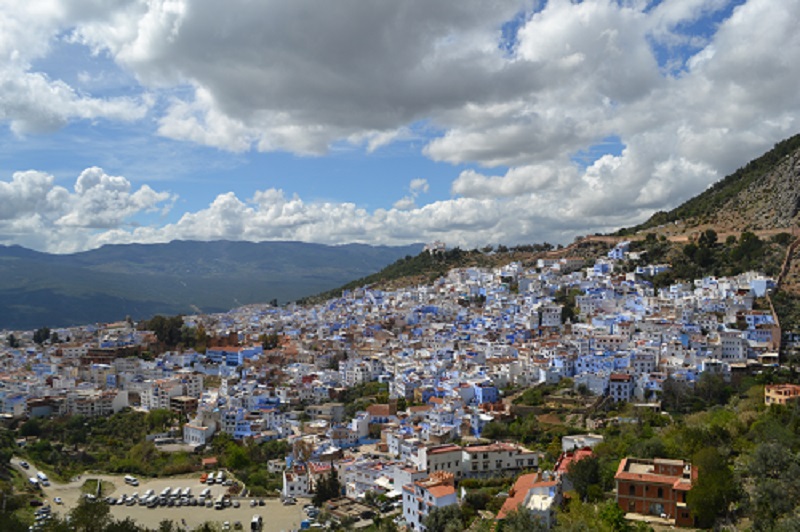 Morocco the only African country with coastal exposure to both the Atlantic Ocean and the Mediterranean Sea. It is home to a very famous Islamic traveller and philosopher Ibn Battouta. With nine UNESCO World
Heritage Sites, a valley dedicated to roses, plentiful fruits, running water, and Africa’s busiest square, Morocco does not fail its visitors. There is undoubtedly something of interest for each age group. 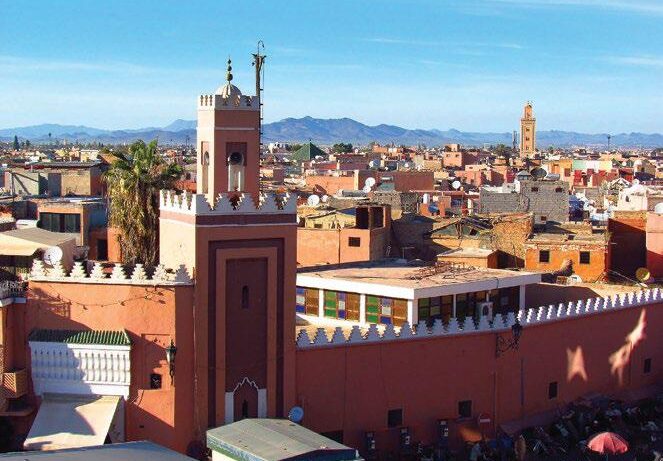 TravelJingles in a rendez-vous with H.E. Mr. Mohammed Maliki, Ambassador of His Majesty the King of Morocco to India.

Home to The Great Sahara Desert, Morocco serves as an amazing tourist destination. Tell us about the three must-do things in Morocco.

It would be unjust to speak about three must-do things only, in Morocco as there are many more to see and enjoy. Indeed, Morocco’s rich geography, in terms of landscapes, mountains, desert and coastline, make it a must-see destination, especially being located at a mere two-and-a-half hour flight from Europe’s major cities. The Kingdom is a country of dizzying and mesmerizing diversity with colourful architecture and vibrant cities.

However, few must-do things could be a visit to the Jemaa el Fna Square in the Medina of Marrakech, the largest open theatre and art place in the world, which is famous for its performing street artists: storytellers, acrobats, Arab and Berber musicians, and Gnawa groups and seers. It is a UNESCO protected ‘intangible cultural heritage’ in Jemna el Fnais also described as the ‘Disneyland’ of Morocco.

Other must-do choices can include experiencing a desert sunrise at the
Merzouga dunes where highly diverse wildlife of flora and fauna exist and
spending some time in Fes, the oldest Medina (traditional City with its
commerce) of Morocco,another World Heritage site. You could indeed swim in Marrakesh at midday and ski after a two hour drive, in the Atlas Mountains… 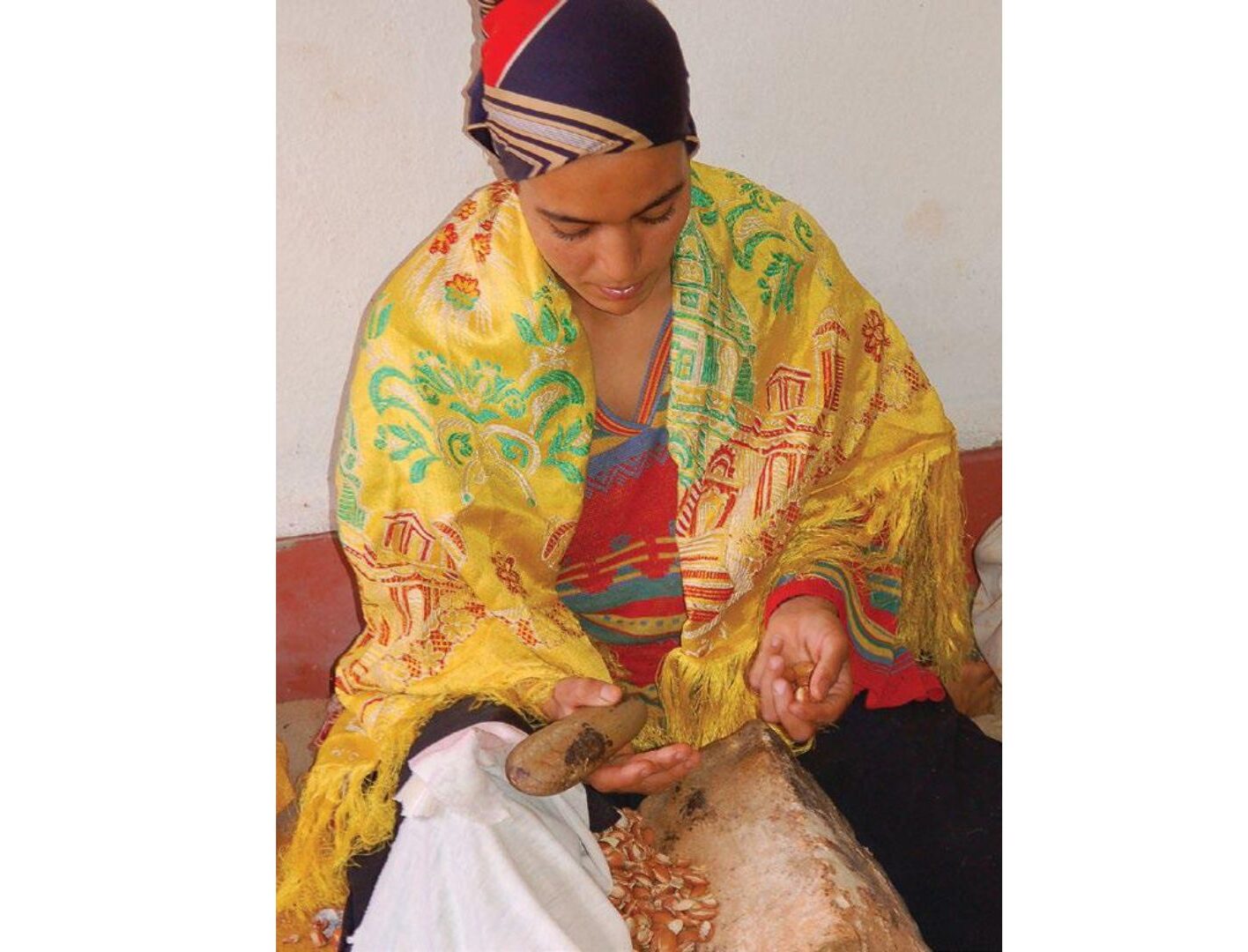 Marrakesh in Morocco is called the ‘Red City’. Comment.

Marrakech is one of the four Imperial cities of Morocco. It is called the “red
city” because of its Medina’s beaten-clay buildings and ramparts, which were built during the reigning of the Almohads dynasty in the 12th century. The red environment friendly walls of the city and various buildings constructed in red sandstone afterwards, have given the city this nickname. The colour resists also the extreme heats of summer.

Marrakech is also justifiably popular as the city of luxury, thanks to its famous palaces, its numerous 5-star hotels and restaurants, luxury spas and hammams and charming riads (traditional houses) in the medina. Amongst others, there is the Mamounia and its enchanting gardens,
the luxurious Royal Mansour hammam and the refined cuisine of Namaskar
Palace. 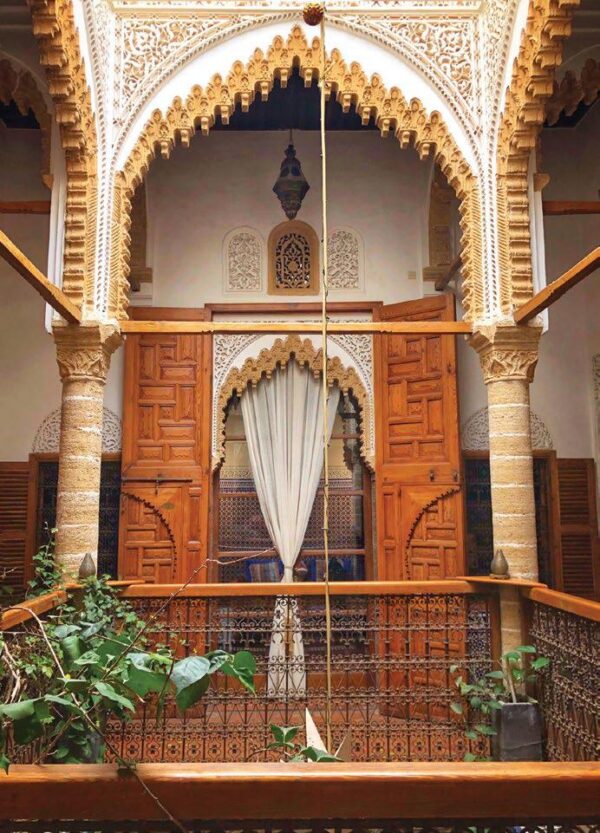 Morocco is the producer of real good quality leather. Tell us about the souvenirs one can carry back from Morocco.

What makes Morocco leather so special is that it is made from goat and
sheep skin, which is easily identified by its visible grain. The tanning process retains the pattern in the skins, so the resulting leather has a highly satisfying texture. With more than eight centuries expertise, the most refined leather has been referred to as maroquinerie in reference to Morocco.

There are so many incredible things to buy in Morocco, as when you may be spending days wandering the souks of Marrakesh, Fez and Meknes cities. Few things that can’t be missed while coming back from there. Leather poufs or leather clothing are examples of them. Little wonder that Moroccan leather is highly prized and shipped all over the world and Fes, then Marrakesh, are the best places to buy world-class leather in Morocco. Lanterns also are unique in Morocco. They may be metal or glass standing lamps, embossed with beautiful artwork. The world famous and authentic Argan Oil, Mint Tea or Moroccan Tea is the way of life in Morocco, which must be enjoyed. A Berber carpet is also a typical souvenir of Morocco as they are hand woven in wool, in bright colours, and last but not the least one should definitely buy the wooden
boxes made of polished Thuya wood. 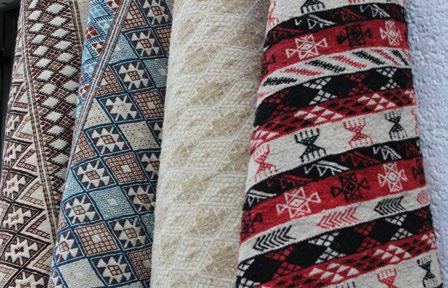 Morocco is very famous for its hammams. What other activities can one enjoy when in Morocco?

Hammams are a great part of Moroccan culture. Some are almost like spas and they are among the best experiences you can have in Morocco. Other experiences could be spending a night in the desert where there are the stunning sands of the Moroccan Sahara. From nights spent under the stars in a desert camp to sunsets watched from the back of a camel, the wonder of the desert never ceases. One can also snap Chefchaouen, this delightful town, nicknamed the Blue Pearl of Morocco, another must-see spot. Or else, one can move to the wild Atlantic coast and go surfing, because if there’s one thing Morocco is becoming increasingly well known for, waves! 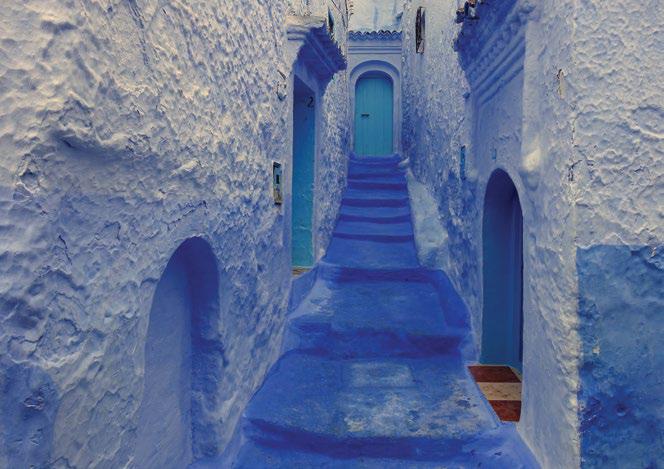 There are many Bollywood movies like ‘Tiger Zinda Hai’, ‘Agent Vinod’ and many other that were shot in Morocco. What makes it a filming destination?

The grand architecture of Morocco’s Imperial Cities, picturesque mountain
villages and dramatic sand dunes, make Morocco a highly – sought after backdrop for the film industry. Filming in Morocco is ideal for many reasons, such as its 22 proximity to Europe, highly developed film infrastructure, low production costs and endless sunny weather, besides perfect light for shootings. Morocco provides a solution to the filmmakers who want to shoot films that require a Middle East set up, but in an environment that makes them feel much safer. A beautiful blend of mountains and the desert, sea and snow, traditional and yet so modern, makes Morocco an ultimate destination for the film fraternity and for the wedding planners to have luxurious weddings and functions as well. 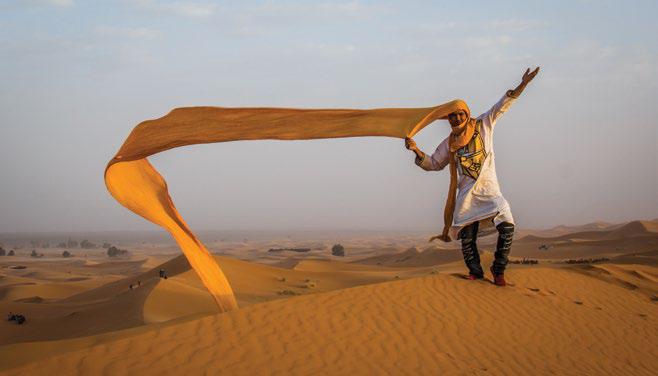 What are the similarities between India and Morocco?

The two countries have a long history and a strong cultural heritage. There are many similarities in terms of traditional marriage proceedings and habits. Apparently, the tradition of arranged marriages and the strong family component are common values in both countries. Second, architecture. For an Indian visitor from Chandigarh, the city of Rabat with its bungalows, gardens and high walls, may recall memories. The Maugal carving and traditional plaster and woodcarving in Morocco do reflect a long tradition of architecture, and building palaces and mosques.The styles of the houses is also very much like what you would find in stand-alone houses in India. Third, musical instruments like Rabab. This important component of traditional Moroccan music, was introduced to the Indian classical music around the fourteenth and fifteenth centuries illustrating one among many other cross-cultural aspects and similarities between Morocco and India. 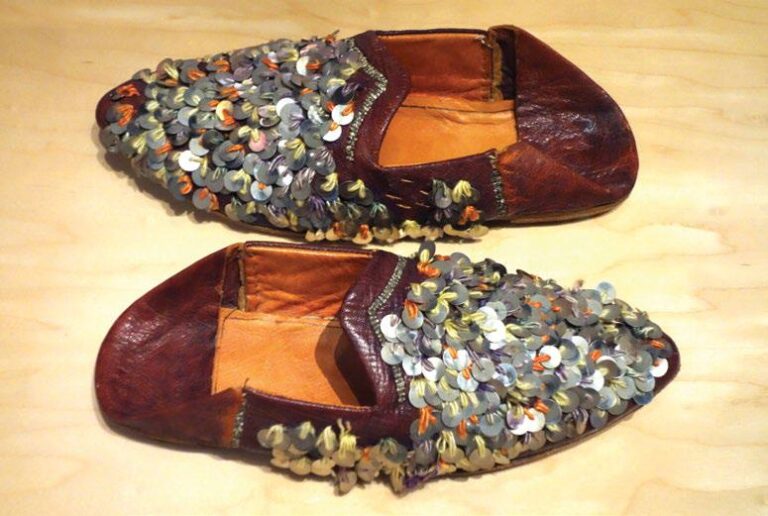 Tell us about Fez. What makes the Blue city so famous?

Fez is the medieval capital of Morocco founded by Idriss I in 789, and a great city of high Islamic civilization, culture and education. Fez has the best preserved old city in the Arab world, the sprawling,
labyrinthine medina of Fes el-Bali, which is incidentally also the world’s largest car-free urban zone.

Fez tops the list for its maze-like medina, fabulous foodie scene and annual Festival of World Sacred Music. It is one of the imperial cities of Morocco. It is famous for being home to the world’s oldest, still functioning university, the University of al-Qarawiyyin (established in 859 AD by a lady called Fatima Fihriya). It has an ancient walled city.
However, it is Chefchaouen, located in a mountainous area of north Morocco, which is referred to as the Blue City, known for its traditional houses, stairs and alleys all painted in blue and white, and very much liked by tourists.

Fez, once the capital of the country (intellectually and politically) and at the crossroads of trade, has been the spiritual and cultural capital which has always been known for its traditionally refined craftsmanship. 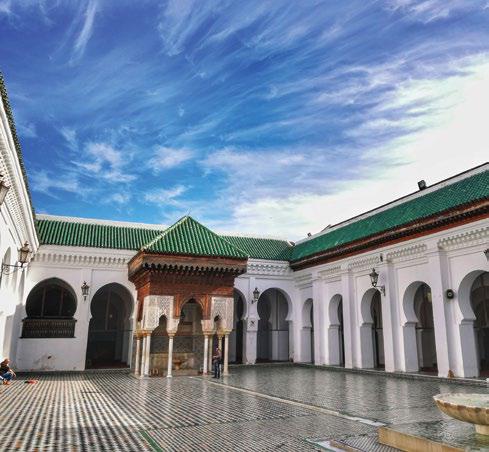 Couscous is a very famous consumed meal in Morocco. Tell us about the gastronomy of the country

The mystery of Morocco is not only linked to its attractive landscape
but also to its gastronomy, which has a long history. Considered as one of
the most diversified and sumptuous foods, Moroccan cuisine offers a
delightful experience. In fact, Moroccan cuisine draws from a wide range of influences, being at the junction of many cultures all put into a melting pot over hundreds of years to create a distinct style and taste of its own. A Moroccan dish is an invitation for all the senses, enticing our sense of smell, sight and taste.

As for couscous, it is traditionally served on Fridays, when families gather after prayers. This is because the proper dish is enjoyed collectively and served in one big plate at the middle. It takes a long time to prepare its ingredients. Coarse semolina is hand-rolled into small granules to be steamed and fluffe three times. Its pale in colour, deliciously creamy in texture and served in a variety of manners, the most known being with
vegetables and/or meat. 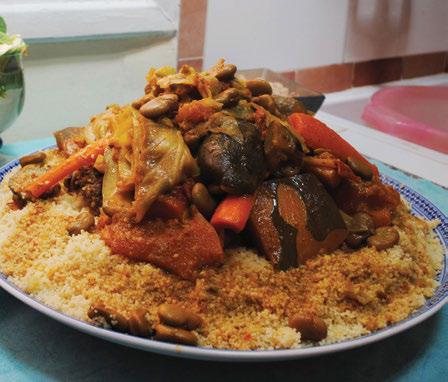 What do you like the most about India and why?

I like the culture and diversity in India. It is a land of such a great, rich and fascinating diversity, with an ancient civilization and culture it has inherited, the thrilling present and of course, the great promises of the future.

Also, India with its highest rate in youth population, is keen to contribute altogether for the nation’s development. In addition, the warmth and hospitality of the Indian people are most lovable. I felt at home in India almost throughout the years I have been in here. Morocco has an excellent relationship of friendship and cooperation with India and this is an important asset and heritage, which we work tirelessly in both countries to preserve and consolidate, for the benefit of our peoples and future. generations.